Discover the 5 most attractive personality traits in a woman and what it takes to attract men and make them CRAVE you effortlessly in this new article!

Now, often what happens is we tell ourselves a lot of different stories. I’ll give you an example; when I met my husband, Brody in a spiritual discussion group eight years ago (we just had our eight-year meeting anniversary) he was typing on his phone during the discussion group, and I thought, “How rude! He’s texting another girl,” because who else would you text so rigorously and so urgently that it can’t even wait until the discussion group is over? Only to find out that he was taking notes, that was his storyline.

So what is your storyline? What interpretations are you making, and how can you make even more positive, affirmative interpretations versus negative interpretations, right? Having stories like “There is no good man out there,” or “They’re not going to last,” or, “They’re not going to ask me out on a second date,” or, “They all just want sex.” Watch your storyline, and then turn them around. So one example of how to do this is asking yourself powerful questions and affirmations in the morning to set yourself up for the right storyline: How can I be even more available to all the amazing men that are already around me? How can I be even more aware of all those quality men that are already here right now, creating storylines? Everything is happening on my behalf, God works in my favor. God works for me, not against me. You can use these to create all those different stories.

I started doing this because my husband, when I met him, told me that I’m the girl in his story. I was like, “Story, what does that mean?” Well, he had written out exactly his story, what he wants in a woman, and how that story goes, and that was, of course, coming from his unconscious expectations, and then that was rehearsed, he was rehearsing it every day, year in, year out, week in, week out, and he even did that after we were dating because now he was creating the life that we would be creating together. So always be aware of what your storyline is.

So I’ll give you an example of what your own shadow can look like. So I was at a business conference about five years ago and I was told back then that I was borderline arrogant. The company grew fast, we got great results for my clients and so on. So, I was on stage, with hundreds of women in the audience and having been told that I could’ve done two things; I could’ve been like, “Oh, no, no, no, no, no. I’m so sorry.” I could’ve apologized, I could’ve been like, “Oh, no, I’m not arrogant. I’m so grateful. I’m so,” right? But what I did instead, I did a whole sexy dance because I knew I had to own that about myself. I had to be like, “Ooh, I’m arrogant. All right,” and I got to do a sexy dance with that and own that, and when my husband saw that, he was just totally mesmerized, and even other women were mesmerized.  I was wondering what I was doing in the corner there, doing a sexy dance, right after I was told that I’m arrogant.

This one is extremely attractive to men. Be joyful, be funny. There always has to be some playful element. I have this incredible painting by Thomas Kinkade hanging here, which is from Cinderella right before she goes into a pumpkin carriage, right. Embrace some play. Don’t say, “Well, I’m an adult. I need to have it all together. I need to be competent.” That’s not attractive at all.  What’s attractive is being spontaneous.

Let go of who you think you are and who you think you need to be. This also allows you to change your habits so much faster because research shows that if you try to change your habit from a self-disciplined place it takes you about, I think it was about 400 repetitions until the myelin sheath is, wrapped around the axons enough to create new neural pathways. However, when you make these changes with doodling, with play, it only took about 20 repetitions. So that is also what the man experiences as well. It’s how fast you can change habits that you want to change, which, of course, increases your confidence and increases your resourcefulness and your attraction factor.

4. Being Mysterious To Yourself

This adds on a little bit to what I said earlier, which is, don’t make assumptions about who you are, but instead, if I were to say, “Let’s do an exercise, and let’s pretend you’re just letting go of everything you are: you’re a mom, what roles you have, what job title you have, if you’re a sister, whatever it is if you let all of that fall away, you are mysteriously yourself. You’re “Wait a minute, if all that falls away, who am I?”

If you are mysterious to yourself, that’s extremely attractive. Why is that? Well, because you are on the edge of your comfort zone, you know. Edges are always attractive, okay, and it also gives the man certainty as well, so he can focus on his mysteriousness inside of himself. When you do this, your focus expands, you get to discover that maybe you like a certain hobby that you didn’t know that you were good at because you were not mysterious to yourself.

What comes to mind is, I forgot what her name was, but I love “Survivor,” the show, and there was this one incredible woman, and she was just sitting on a couch, while her husband was just working. I think she was a nurse, but she was mysterious to herself. She said, “okay, so I know who I am. I know I’m the nurse and the mom and sitting on a couch, enjoying my evenings with my husband. What else is possible?” Okay, and then she came on “Survivor,” and went far in the competition. She went to the finale, that’s incredible! It changed her life completely, and so that’s what you want to think about yourself.

How can you put yourself in different soil, and maybe you have seeds inside of yourself that would blossom. You would flourish in ways that you don’t even know. When you talk to a lot of couples that are married 40, 50 years, or that have no problems attracting men into their life. They embrace that mysteriousness inside of themselves. Now, we also talk a lot about it in a free Magnetize Your Man Facebook group, and you can ask, of course, ask as many questions as you have in there as well. MYMFBGroup.com.

What I often see with my women is that they describe a date and I notice that they talk more, and they feel less because they’ll talk so they don’t have to feel because what they feel is uncomfortable. What they feel is shame, insecurity, inadequacy, guilt, and so on. However, the most powerful thing you can do is feel yourself because then, the man across from you can feel as well.

Remember, men don’t remember what the date was all about, what you talked about, but they remember how you made them feel, so think about that. If you speak a lot, and you’re like, “I did this, and I accomplished that and isn’t that a funny story?” And so on, but they don’t feel you, then there’s not going to be an imprint, you won’t have an impact and then what happens is they go home, and they forget all about you, and you’re heartbroken because you thought you had such a great date. This is why he doesn’t reach out to you after a date that you thought went well because he didn’t really feel you.

Men feel a woman first before they turn their head and see what she looks like and so on. They feel the feminine energy first. So that’s what I would recommend for you. How you do that is by really coming to yourself, taking a breath. Even calling yourself out and saying, ” I could share a lot right now. I could talk a lot but hey, I’d love to just take that moment in with you.” And so notice what occurs: the man feels space, he feels acknowledged and connected to, and the man senses that you are confident because you felt the courage to be in the space, in the gap.

Most Attractive Personality Traits In A Woman Conclusion

So if you want to learn more about how to do all of that, take my free quiz to attract your man by clicking the button below. This is it for today. One question I have for you for the comment section is, which of those habits are a breakthrough point for you that would help you to be more attractive to men? So leave that below in the comment section. 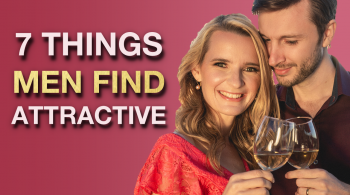