1. Introducing You To Their Family & Friends

Now, I’m going to give you the opposite example. Gosh, it was about 15 years ago, I was dating this guy, and he only wanted to meet me either at his place, or he wanted to meet me at my place which was really weird. It had nothing to do with being sexual, either, which made me think. I started to realize that I didn’t really know his friends, and he would always separate them from me – I would have to leave before they arrived. It was really strange.

So when the man is actually in love with you, he wants his family and friends to get to know you. He’s proud of you. He wants to show you off a little bit, but of course, be careful you don’t want to just be arm candy. He will also want to know what his friends and his family think about you because he is serious about you. He is curious, how well you are merging with his world because he’s considering you as his future wife.

2. Speaking Highly Of You, Even When You’re Not Present

Even if you’re not present, this is pretty important because there’s this unspoken loyalty that he feels towards you. He has developed his protector instinct towards you, he sees you as his wife, so he speaks highly of you. He is your cheerleader, your advocate. When someone else would speak, not so highly of you or maybe even gossip about you, he will not have anything to do with that, and he will protect you. He will defend you because you are one item.

3. Sharing Their Emotions With You

Now, this is a really interesting phenomenon. It’s almost like a man can’t help himself. When he truly falls for you, he becomes so vulnerable. He becomes so transparent and authentic, that he wants to share all of himself with you. He wants to be fully seen by you, fully loved by you – unconditionally loved. How would he be able to do that, if he isn’t able to share all his emotions with you? On top of that, he wants you to be happy.

So when I met my husband, he shared all of his emotions with me. Not right from the get-go but certainly when he started to fall in love with me because he wanted to build trust with me as well. He wanted to share his world with mine and encourage me to share my world with him. When a man is in love, it’s almost like he wants to give you his whole heart, and wants you to understand how much he loves you. That’s going to give him so much satisfaction, to know that you know how much he loves you. One thing that I always say is when we find the other person, we want to magnify our experiences, especially when we already have an amazing life. Which of course those quality men that you seek to attract have. They want to magnify that experience, by sharing it with you. You can learn more about this by taking our FREE quiz & getting your custom gifts and support using the special link below!

4. Making You A Priority

Now, I have so many women come to me all the time and say, I want to be the chosen one, I want to be Number 1. So, it’s important that a man that loves you makes you a priority – makes you his number 1. His friends don’t come first, or his family, you come first because remember you are now his family. You’re becoming his wife, or you’re becoming his future partner if he doesn’t believe in marriage for some reason or you don’t want to get married. So that’s, that’s totally up to you but he’s with you, your, his future in one way or another.

So, he makes you a priority. He also wants to make you happy, and he wants you to make him a priority as well, that’s important to see. So if you encounter men, and I see this all the time, who put everything else first and then her last. You rest assured that he is not in love with you because you want to honor what you love. When you honor there is flow, there is abundance, there is joy. So he seeks to honor you when he is in love with you.

5. Going Out Of Their Way To Support You

Now, I have so many women telling me examples all the time like, I have a client right now, and this guy drives one and a half hours, whenever she sees him. He always tells her “no, you don’t have to meet me halfway” or “you know I’ll come to you, I’ll pick you up.” He’s really happy to go out of his way. He doesn’t feel inconvenienced, he respects you so much, he honors you and celebrates and cherishes you so much that he is so happy to go out of his way.

Now, take to the contrary, lots of men who say, “Oh, well you live 45 minutes away but I don’t know if that’s going to work out, I have a long workday.” But that’s always an excuse, why can’t they meet you halfway? That’s not normal, you know when he is in love with you, truly in love he will go out of his way, to support you.

Now take as an example of the opposite, someone who never really put thought into anything. Like he’s kinda “whatever we can just meet at McDonald’s,” you know what I mean?. That’s not surprising, he doesn’t put any thought into it, it’s not considerate, it’s not very respectful. So take as an example, those men who want to surprise you are really showing you that they are in love. I have another client who gets a knock on the door, she had this gorgeous champagne bottle, it’s very exquisite champagne with some chocolates in front of her door that said it was from a secret admirer. This can happen to you too! So rest assured that a man will want to surprise you when he is in love with you.  Learn more about this and get more specific support to know if he’s falling in love with you in this way by joining our FREE Facebook dating support group using the special link now below!

So again, what he thinks, what he says, and what he does, is in alignment, he wants to be your King, he wants to have integrity. So there’s no talking to you and then dropping off the face of the earth only to come back three weeks later like, “Oh, I just had a busy day but lots of love.” Who cares? A man who’s fully in love with you, his words and actions match every single time. There’s not a drop-off and there’s not a time where you constantly feel anxious and you wonder if he’s in love with you or not. With a man who’s in love with you, you’ll know, that he is in love with you. He will treat you accordingly. He’ll make sure that you feel emotionally safe and you feel taken care of.

He initiates – he asks for your phone number, he actually calls you, he asks you out, he picks you up, gives you choices for dates, he pursues you. He’s interested in you, so he follows up with you if you don’t follow up with him. There’s no problem initiating because you are on his mind all the time anyway so it’s natural for him. Even just calling to check in and let you know that he’s thinking about you and looking forward to seeing you later. He’s excited to bring joy into your life, and he wants to be the wild man. To initiate, to pursue because he enjoys seeing your feminine side delighting in that.

Signs He’s Starting To Fall In Love With You Conclusion

Now that you know if he’s starting to fall or not, the key will be to GET him to fall if he hasn’t yet, or to get him to fall EVEN MORE. You can learn how to do this now by getting your free quiz and custom gifts & support to get him to chase you by using the special link below. Enjoy! 😊

« Previous Post He Ghosted Me And Came Back (Here’s WHY!) Next Post » What Men NEED To Fall In Love (5 Things He MUST Feel) 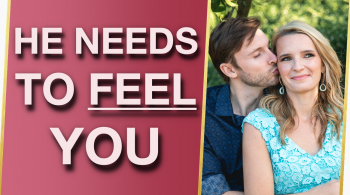