Would you like to discover the top five avoidant personality disorder symptoms and causes? Hey, I’m Antia Boyd, Founder and Creator of the Magnetize the Man Method and look, if you are new to my channel, don’t forget to subscribe by clicking the bell below to get informed about new juicy videos coming your way that help you to stop attracting emotionally unavailable men and attract the right partner for you. Now let’s talk about avoidant personality disorder. Now what we want to know about that is oftentimes really shown through, extreme shyness, social anxiety, and it is also more in the anxious disorder family. Now we’re gonna look into more what are particularly the five top symptoms of that. So let’s go ahead and dive right in.

So symptom number one is fear of rejection. Now what’s interesting with those group of people that have this disorder, which is a very small percentage of the population, is that they would rather not have any connection at all, than experience rejection, in my opinion doesn’t extreme fragility about them, right, there is something that’s like, they literally can’t cope of it and that is such a tremendous anxiety inside of their system, again, anxiety really meaning, imagine that the whole system is constantly aggravated. There’s a system that’s constantly sort of annoyed, that’s not what they feel. But the annoyance is just an example of what it means when a system is aggravated, versus imagine system being cool, right. So that particular system is like really heated up, and that heat can cause a lot of fear. Because that heat inside of the body literally reminds us sort of more of the fight or flight. We’re not cool, calm and relaxed, when we get ready for battle, when we get ready for rejection, right. So there’re more like that and they have this extreme fear of rejection, right, it’s such an extreme sort of like, impact on them, on the system, mentally, as well as physically, as well as emotionally, right, that they rather disconnect all together.

Symptom number three is being socially insecure. Now think about it this way, when you socially secure you know exactly when to talk, who to talk to, how long to talk, where to go, where not to go. You just have a natural rhythm with other people. Now, those particular individuals that have avoidant personality disorder, they lack that particular contact with themselves that allows them to feel into that rhythm with another person. Right, like feeling into that other energy field off that other person. It’s kind of lacking for them is not just even back and forth. But instead, they’re really terrified, so they’re insecure, and so what happens is, when we feel insecure, we feel really fragile. So they have this fragility inside of themselves, that sort of almost like fragmented, so meaning when we say we have fragmented side of ourselves, this means we are almost different puzzle pieces, different parts of us that have different opinions that have different voices, and honestly, that have different goals and agendas for you, right. So a part of you may want to protect you, while another part even wants to have a deep connected long term relationship. So those would be an example of those two different parts inside of itself. Now, when they’re combat enough, you create a lot of insecurity in your system, insecurity you could also call instability as well the more secure we feel, the more stable the more aligned we feel. The more insecure we feel, the more unstable we feel. I hope this makes sense.

Now the next symptom number four, is well they really prefer distance over closeness which of course leads perfectly into this example. If somebody feels more insecure in the presence of another person, what are they gonna do? They are going to back off and they are gonna do this in many different ways. For example, they may be inconsistently in communication with the other person. They may also be inconsistently connecting with the other person, they may be inconsistently, like sending signals, right. So meaning maybe they have some bad open body language, but next time they have a completely closed body language, so everything inside of them is really inconsistent, right. Why? Because they don’t wanna let someone get too close to them. If you have consistency in especially in relationships, in social settings within groups, there’s more intimacy that’s being built. You develop, you patterns inside of yourself that you like, oh, I know who Joe is, I know who Molly is, I understand there’s some patterns to her. But if everything is inconsistent, and insecure, that means there’s this distance. I don’t really know who this person is. I don’t know if I can really trust this person. Also, they feel really unsafe when they get close to somebody literally, if you’re physically unsafe, so their nervous system is gonna go haywire. Meaning their system, their body, their heart, their gut, their mind, they get ready for fight or flight, they get ready to run away. And this is not necessarily rational. This is often and times actually really irrational. This when they have the most amazing moments, they feel like they need to end it as soon as possible and then need to disconnect from it and that need to run away, because why? because it’s getting too hot, it’s getting too intimate, it’s getting too warm, it’s not feeling safe.

And lastly, symptom number five, poor self esteem. Now what we see in our self esteem research is one definition is high self esteem really means that we have the resources inside of ourselves that we can deal with whatever comes our way. Meaning we have lots of deposits in our self esteem bank account, not so much for the avoidant personality disorder. There’s a lot of debt in that self esteem bank account, because they don’t trust themselves, they don’t trust other people, what they think, what they say, what they do, is not in alignment again, there’s disconnection, hence, there’s also not that resourcefulness as well. There’s not this ability to take on a new perspective. You see, when you are in fight or flight, you’re over identified with your current emotions in that moment, You think you are your emotions, you think I am my anger, I am my sadness, I am my happiness, or I am my fear, versus when we have high self esteem, but if we stop over identifying ourselves with our emotions, we’re able to step back, give it perspective, it’s like almost having a third person narrator and say, “Oh, hey, what’s going on from this perspective?” How can I see this in a different light? What’s a new point of view I can take on. Now the avoidant personality disorder is gonna have a really hard time to do that and to actually step outside of themselves, to look at themselves, to see themselves and to have a new perspective, so they will have a harder time and have poor self esteem. Also, they constantly questioning themselves, they’re doubting themselves, they’re second guessing themselves, which can then also leads again to poor self esteem.

So look, these are the five symptoms for avoidant personality disorders for today. So the question of the day is, which of those five avoidant personality disorders, either are you embodying or someone that you know, is embodying and how do you think you could help them? Like pop that into the comment right below, of course if you liked this video, like it, share it, subscribe to my channel and also don’t forget to check out my irresistible feminine dating type quiz at MagnetizeYourMan.com and what I would recommend is just really seeing like okay, what’s the type for me? And how am I communicating that into the value system of the men I currently dating? Or how am I not communicating that, maybe I’m trying to be something completely different, who I’m actually not. And that’s why it’s not working out. So I invite you to take that quiz and have a chat with me afterwards. Ladies, this is it for today. Much love to you, and I will talk to you very soon. Take care, bye bye. 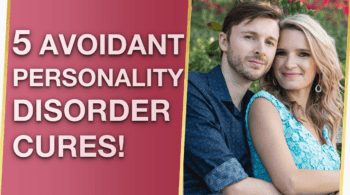