Contents hide
1. Focus on Yourself
2. Lean Into Tension
3. Surprise Yourself
4. Have Your Own Goals
5. Embrace Your Uniqueness
6. Be Mysterious & Tease
Conclusion

Now, what do I mean by that? Most women that come to me are, what I refer to as, other-focused. Due to their own wound patterns from childhood, they learn that it’s not safe to focus on themselves and that they should actually be gaining the approval, respect, and admiration of the other person. So, they will actually outsource themselves and their opinions to other people.

So, for example, they’ll always be outgoing. If they’re going on a date, they will be the one asking all the questions and doing things that have outgoing energy instead of feeling what it’s like for that energy to come back to them. What does it feel like for a man to invest in you? What does it feel like for a man to ask you the questions and be curious about you? This can be challenging, because you may have men who are more interested in talking about themselves than they are interested in you. So, to drive a man crazy, focus on yourself.

Now, I see so many women who are afraid of confrontation- they don’t want conflict or to stand up for themselves. Why? Because they think when tension occurs, that automatically means that they are receiving the other person’s disapproval, that they’re going to withdraw or even worse, that the other person is either going to become aggressive and potentially even become abusive, especially if that’s what they have experienced in their childhood with their parents growing up.

So, what’s important is to lean into the tension. When somebody’s not saying something after you disagreed with them, lean in. What you don’t want to do, and I see so many women do, is to laugh and act like you were kidding, that it was just a joke and you didn’t mean it. That’s not standing up for yourself, and you’re going into denial. If you do that you’re not advocating for your needs or reinforcing your boundaries. So instead, lean into the tension.

Wait a minute, Antia, what does that mean? When I came to the States sixteen years ago, I wanted to constantly surprise myself. One way I did that is by putting myself into uncomfortable situations. Now, some of you may know Sara Blakely who’s the youngest female billionaire on the planet right now. One of the things she does is surprise herself all the time. For example, she’ll go into an elevator, and she’ll sing. Now, as you can’t get out of an elevator when it’s moving, it feels extremely uncomfortable. You may have also watched Impractical Jokers, I’m a big fan of that and my husband is an even bigger fan of it. They put themselves into situations where they have to improve and surprise themselves.

Now, why do you want to do that? Well, you want to break out of your predictable patterns. There’s a part in your brain called Broca, and Broca attempts to predict everything. So, if you always use the same ways to engage with a man, then he’ll be making assumptions. Even more importantly, when you are always engaging in the same patterns, you use the same language, use the same examples, and so on. You’re losing charisma because all you’re doing is becoming robotic; you’re not being organic.

When you become more robotic, you’ll be less engaging and less connected emotionally. This is because you already feel like it’s just a rehearsal; you do the same thing over and over again no matter what. That’s not surprising and therefore it’s not charisma building. So, what can you do to surprise yourself? What can you sign up for? Where can you raise your hand when you don’t know the answer? Where can you put yourself into a slightly uncomfortable place as Sarah Blakely puts herself in all the time?

4. Have Your Own Goals

One way you create the space and attract men that give you space is by having your own goals. By not collapsing into them and wanting to be part of their world, while having nothing else of your own going on you have nothing else. When you don’t have anything of your own to bring to the table the relationship can never grow, it doesn’t stay interesting, and your date can feel this from you. But when you have your own goals, we’re going back to the tension, that’s a healthy tension, it brings harmonious tension to your relationship. There is a curiosity that comes from not always knowing everything about your day, for example. So, there are no assumptions that can be made, but rather you explore each other over and over again, very exciting.

To give an example, when I started dating Brody, and I still do it occasionally, I would walk into his office and I would just, jump, “yippee”, you know? Then I would walk back out of the room and back into my office next door and continue to work. So, that’s part of my uniqueness. Sometimes I dance with a fish. Raise your hand if you want us to do a little TikTok blog because we sometimes think we should film all of this, it’s so hilarious.

Now, but it hasn’t always been this way for me.  When I was still dating, like you are right now, I would feel ashamed. I knew I had all those quirky sides about me but I was afraid that if he found out about that he wouldn’t be interested anymore and he’d think I was weird or a freak. I’m here to tell you, fly your freak flag. It’s going to raise your charisma quotient, for one but it’s also going to be so magnetic, and you’re going to feel so self-expressed. This increases your visibility, that the men that are right for you will be able to find you.

Another thing I did was I was at a conference a couple of years ago, I was bored because everybody was saying the same thing, we just talked about Broca, the part in your brain that can predict everything. So, I said, I need to wake up the room a little bit here, I took the mic and I said, “wake up!”  I yelled it into the microphone, which also goes a little bit with surprising yourself because I surprised myself but I was also flying my freak flag. And some people weren’t into it but some thought it was awesome, but it doesn’t matter that’s what I felt I had to do at the time. Needless to say, my husband is madly in love with those unique, quirky ways of interacting with me and as a matter of fact, he bounces off that all the time. Imagine, your guy not only loving it but then actually improving himself because of that – feeling inspired to express his own quirkiness.

This goes a little bit back into managing the art of tension. Now, I’m talking about a different tension here. When a man asks you a question you don’t always have to answer with a sentence, you can answer with another question, you can tease them. You don’t always have to say everything right away, you don’t even have to answer exactly what he said.

Let’s say he says, “how was your week?” You could just say, “work was great.” but again, that’s going back into those predictable patterns. Instead, maybe you say, “Hey, I really would love a piece of chocolate right now” What you’re trying to do when you’re being mysterious, is create a pattern interrupt. You sent his brain on vacation, that part that wants to predict things and now he’s present with you. It’s going to drive him nuts because he doesn’t even know what to do, and he surprises himself too because he has to improv, you’re keeping him on his toes.

So what that doesn’t mean, because I can already see some of you rolling your eyes, is that you’re pretending to be someone you’re not. No, you’re not, you already have that part inside of yourself.  You don’t need to do things all of a sudden, like speak in a sexy voice if you don’t ever speak in a sexy voice, and you don’t feel comfortable with that. That’s not what I’m talking about at all. You don’t have to turn yourself into a pretzel. It’s more about, doing something a little different.

Ask yourself why are you asking this question? Make him question what you’re talking about – if you’re insinuating something different from what you’re talking about on the surface. That’s when it gets interesting.  sometimes my women send me screenshots of text messages that their guy sent them and it’s so interesting because he’s waiting like are we really talking about coffee right now? Or is that a flirty, engaging tension that they’re creating? So, that’s how you want to think when you engage with a man.

If you liked this article here is what’s next: First, I’d love to hear your thoughts in the comments below! Second, If you haven’t done so already, I highly recommend taking my FREE “Magnetize Your Man” QUIZ to start attracting the right man for you to share your life with & be happier without more loneliness, trust issues or wasting time attracting EMOTIONALLY UNAVAILBLE MEN by clicking the button now below! 😊

« Previous Post 5 Compliments To Give A Guy That Make Him CRAVE You Next Post » He Ghosted Me And Came Back (Here’s WHY!)

5 Compliments To Give A Guy That Make Him CRAVE You 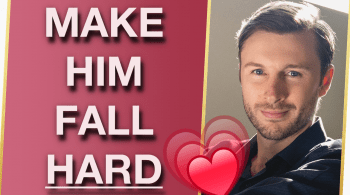 5 Compliments To Give A Guy That Make Him CRAVE You